Article by Josh Zimmerman courtesy of the West Australian 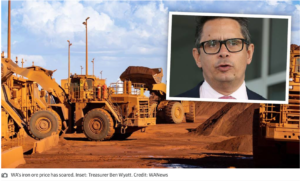 Allowing WA’s resources sector to continue operating throughout the pandemic has proved a “golden decision” that has added billions of dollars to the national balance sheet and averted complete economic catastrophe.

The soaring iron ore price — touching $US108 a tonne yesterday — has fuelled an unexpected royalties and taxes bonanza at a time when practically every other government revenue stream has evaporated.

Treasurer Ben Wyatt said the State’s miners had been “an extraordinary bright spot” in an otherwise desolate economic landscape.

“I don’t think there’s any doubt that Western Australia’s performance, primarily led by our world class mining sector, has saved (Federal Treasurer) Josh Frydenberg from what would have been a much more dire set of figures,” Mr Wyatt said.

“Very early on there was a very strong push by some States to close everything down, including the mining sector.

“Western Australia resisted that firmly and I think that has been proven to be a golden decision.”

In his December State Budget update, Mr Wyatt pencilled in a “conservative” projected iron ore price of US$66.20 for the current financial year.

For every dollar the iron ore price remains above forecast the WA Government pockets around $81 million in additional royalties.

Even if it the price were to stabilise at $US90 for the remainder of the year, that would represent a nearly $2 billion royalties windfall for the State.

“The iron ore sector has been in rude health on the back of a very, very high iron ore price that has been maintained for longer than I think most people expected,” Mr Wyatt said.

He attributed the elevated price to increasing Chinese demand at the same time as the world’s second biggest exporter Brazil grapples with a massive coronavirus outbreak hot on the heels of dam failures at key mines.

Mr Wyatt praised the adaptability of the State’s resources companies and their willingness to “reorientate” their mainly FIFO workforces – parts of which have relocated to WA from other States.

“As a result, Josh Frydenberg, myself and other Treasurers find ourselves in a fiscal position much better than it otherwise would be,” he said.

“We’re delighted that the mining sector has proven itself worthy of the challenge of operating and retaining its workforce.”