Article by Meilin Chew courtesy of the West Australian 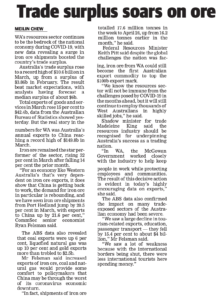 WA’s resources sector continues to be the bedrock of the national economy during COVID-19, with new data revealing a surge in iron ore shipments boosted the country’s trade surplus.

Australia’s trade surplus rose to a record high of $10.6 billion in March, up from a surplus of $3.86b in February. The result beat market expectations, with analysts having forecast a median surplus of about $6b.

Total exports of goods and services in March rose 15 per cent to $42.4b, data from the Australian Bureau of Statistics showed yesterday. But the real story in the numbers for WA was Australia’s annual exports to China reaching a record high of $149.8b in March.

Iron ore remained the star performer of the sector, rising 32 per cent in March after falling 14 per cent the prior month.

“For an economy like Western Australia’s that’s very dependent on iron ore exports, it does show that China is getting back to work, the demand for iron ore in particular is rebounding, and we have seen iron ore shipments from Port Hedland jump by 20.5 per cent in March, with exports to China up by 21.6 per cent,” CommSec senior economist Ryan Felsman said.

The ABS data also revealed that coal exports were up 6 per cent, liquefied natural gas was up 10 per cent and gold exports more than trebled to $2.5b.

Mr Felsman said increased exports of iron ore, coal and natural gas would provide some comfort to policymakers that China may be through the worst of its coronavirus economic downturn.

Federal Resources Minister Keith Pitt said despite the global challenges the nation was facing, iron ore from WA could still become the first Australian export commodity to top the $100b export mark.

“We know the resources sector will not be immune from the challenges posed by COVID-19 in the months ahead, but it will still continue to employ thousands of West Australians in highly skilled jobs,” he said.

Shadow minister for trade Madeleine King said the resources industry should be recognised for underpinning Australia’s success as a trading nation.

“In WA, the McGowan Government worked closely with the industry to help keep people in work while protecting employees and communities.

The result of this decisive action is evident in today’s highly encouraging data on exports,” she said.

The ABS data also confirmed the impact on many trade exposed sectors of the Australian economy had been severe.

“We saw a large decline in tourism-related exports, education, passenger transport – they fell by 15.4 per cent to about $4 billion,” Mr Felsman said.

“We saw a lot of weakness because with the international borders being shut, there were less international tourists here spending money.”